The Town of Hilton Head Island has dedicated the lake at Jarvis Creek Park, now named Lake Liggett, in honor of its former Director of Public Projects and Facilities, Scott Liggett, who passed away unexpectedly in February. 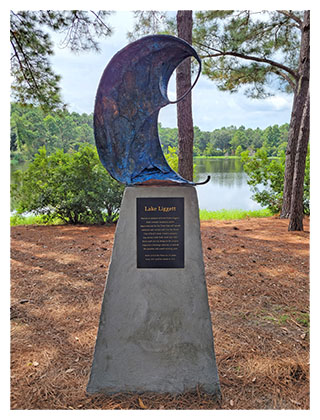 Town staff, along with Scott's former coworkers, family and friends, gathered on the bank of Lake Liggett on Saturday to unveil a sculpture, "Swell of the Sea," in recognition of Scott's wave of contributions to the Island he loved so much.

"Scott was a really wonderful person. He was passionate about his work, and we as a community benefitted from his knowledge and commitment to making Hilton Head Island a better community. He loved this Island and his family. We miss him dearly," said Hilton Head Island Mayor John McCann. "This public art memorial is befitting of Scott's far-reaching legacy and indelible footprint on our Island. Scott's professionalism and engineering knowledge resulted in public improvements that will benefit residents and visitors well into the future."

Scott served the Town for 30 years from 1991 until his death in 2021. He began his career with the Town as an Assistant Engineer, was promoted to Town Engineer and then became its Director of Public Projects and Facilities, a role he held for many years. During his tenure, he oversaw beach renourishment, roadways, parks and pathways, and numerous other public improvements — some of which garnered statewide recognition.

One of his more creative projects was Jarvis Creek Park. Originally conceived as no more than a mid-island drainage project, Scott and other Town staff cleverly designed the project to include this park and lake, now a popular Island amenity. The memorial sculpture bearing the name Lake Liggett was created as the shape of an ocean wave — a tribute to Scott's role in launching the Island's beach renourishment program. Metal artist Corrina Sephora designed the sculpture, which is installed on the bank of the lake in Jarvis Creek Park.