You may hear conflicting reports about returning to the island after an evacuation. Even if you hear that the Governor has rescinded the evacuation order, the final authority for allowing residents to return to the Island is the Mayor of Hilton Head Island.

Once the evacuation order has officially been lifted, all details about returning to the Island, including transportation assistance information, will be announced.


Is Your Home Safe to Enter?

Professional building inspectors will conduct a survey of homes for potential hazards. They will leave behind a placard to communicate the results of their inspection. The color of the placard indicates the condition of the structure, and how safe it is to enter. 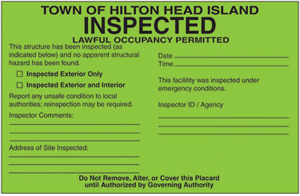 A Green Placard indicates that any damage sustained by a building is minor or superficial, and that the building is safe to enter and use. Actions such as replacing broken glass, repairing roof tiles, and replacing garage doors will require no further permits from the Town. 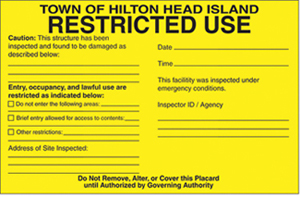 A Yellow Placard indicates that a building has sustained more than minor damage, and only partial entry or occupancy is allowed until repairs are made. The owner should contact the Emergency Permitting Office to obtain a building permit before going forward with repairs. 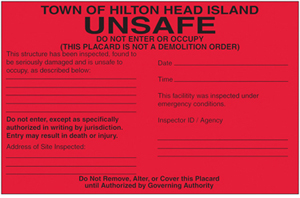 A Red Placard indicates that a building is seriously damaged, and is unsafe. These buildings should not be entered or occupied under any circumstance. Entry could result in injury or death. The building may be repaired or demolished. In either case, a permit must be obtained from the Emergency Permitting Office before work begins.